ICSI is required mostly if the male is infertile when the sperm count is very low (azoospermia/oligozoospermia), sperm are non-motile (asthenozoospermia), sperm have poor shape and structure (teratozoospermia) or all of the above (oligoasthenoteratozoospermia or OATS). In ICSI, a single sperm is injected in to the egg. If sperms are absent in ejaculate, the extraction can be done directly from the testis. This is also known as testicular sperm extraction/aspiration (TESE/TESA). It requires a micro-manipulator which holds the egg by suction. Following this a sharp needle used to inject a single sperm to achieve fertilization. This technique is a boon for couples for whom conventional IVF is not successful.

Like conventional IVF the stimulation protocol for the ICSI is similar. The egg removal is surgical as it is done in IVF. Normally eggs are covered by cell cluster referred to as cumulus corona cells. These cells must be removed completely before the sperm injection succeeds. The removal gives an insight of the egg to embryologist in order to assess the maturity of the egg. Sperms are collected from male partner either through semen or are surgically retrieved from testis (Testicular sperm extraction and ICSI- TESE-ICSI, Percutaneous sperm aspiration- PESA- ICSI). 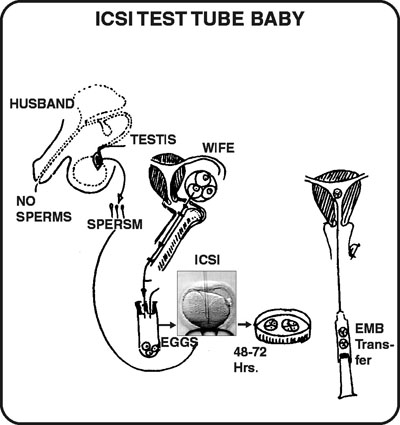 The retrieved eggs are placed in a dish and subjected to 200 to 400 times magnification using an inverted microscope which is fitted with the micro manipulator. The clinic has Nikon Narishige combinations which are of superior quality. The egg which is approximately 100 micrometres in width is held by a glass holding pipette which has a diameter of 40 to 50 micrometres usually on the left side. The injection needle has a diameter of 5 to 6 micrometres on the right.

In ICSI the sperms are immobilized using a chemical called PVP or by hitting the sperm's tail and then loaded in the injection pipette. Injection is completed in a minute's time with help of fine movements of micro manipulator. In the whole process, it is the expertise of the embryologist which results in success. Consequently, fertilization is checked after sixteen to eighteen hrs of injection.

Results: In case ICSI fertilization is achieved with about 65 % success. Even though sperms are injected inside the egg by experts 100 % fusion of both the gametes is not expected.

Blastocyst Transfer: Resulted fertilized eggs (embryos) are grown in reduced oxygen atmosphere in an incubator for 5 to 6 days. They are grown up to partially hatched blastocysts & then safely transferred into the uterus.